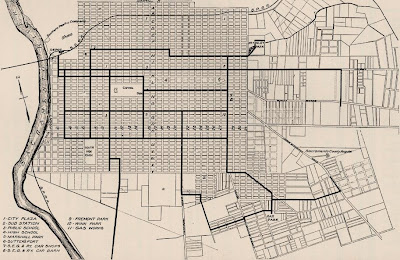 The line extending down on the lower left is the Land Park streetcar line. Originally, streetcar service on Tenth Street started in the horsecar era, primarily serving the Old City cemetery. It was maintained and expanded after electrification to serve a wide variety of needs.

This line featured several different things that encouraged transit visits. Across Riverside from the cemetery was a baseball field, originally known as Buffalo Park, built in 1911. Down Riverside, at the other end of the neighborhood, was the Riverside Baths, located approximately where the Sacramento Southern Railroad crosses Riverside Boulevard. That dropping off point also proved a convenient connection to William Land Park, established later. The Baths were an enclosed structure with both cold and heated pools, private bathing areas, and slides. The structure was later rebuilt as the Riverside Plunge and was destroyed to make way for Interstate 5. 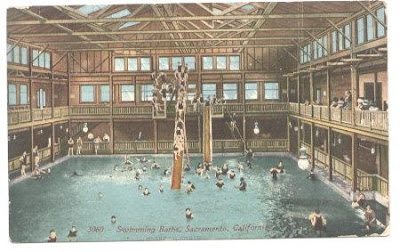 The land in between the baseball field and the public baths, originally hop fields, became a new neighborhood of homes, originally known as Riverside (and at other times as Homeland) but now known as Land Park. Like other perimeter streetcar suburbs, the streetcar route (Riverside Boulevard) became the main commercial corridor, and the residential neighborhoods connected to this primary artery. Many of the older commercial structures along Riverside, as well as along Tenth Street, are artifacts of this period.

The construction of this neighborhood would later illustrate two of the weaknesses of streetcar networks as the 20th century progressed.

During the initial period of streetcar expansion, car lines are typically installed through potential high-traffic areas. As cities grow geographically, they extend their own borders. As seen in earlier examples, streetcars are a common mechanism for encouraging development in new areas. This creates two potential problems: traffic density and proximity to the rail line.

In order for a streetcar to run at a profit, it must have sufficient customers. This is less of a problem in a dense central city area with high population, but the density of suburbs dropped gradually as the 20th century progressed. Residential areas like midtown and Oak Park might have 12-20 dwellings per acre in parts dominated by single-family homes and duplexes on 40x80 lots, or go potentially much higher if two and three story apartment buildings were constructed. In neighborhoods like Land Park, single-family homes on large lots were the rule, with only scattered apartments. The result was a density more like 4-8 units per acre, which means fewer transit customers per mile of track, and thus lower potential revenues.

The second problem of proximity occurs in any growing transit system. As a city expands, streetcar lines extend from the center like spokes from a wheel. As distance from the center increases, so does the distance between the spokes. The only way to solve this problem is to build more spokes or add intersecting transit lines to fill in the gaps, which was expensive and typically beyond most streetcar companies' fiscal abilities.

The Sacramento map above shows the lines extending from the central city: the areas adjacent to streetcar lines were most attractive and commanded the highest prices. Thus, the lots in between were cheaper. Up until the early 20th century, these areas would have remained remote, but the introduction of the automobile created a way to make these areas useful. Potentially, a cheaper plot of land far from public transit meant that the owner could far more easily afford a car. This solved two problems at once. It also meant that residents on the outer edge of transit proximity would see their neighbors with cars, riding to work in comfort while they trudged to the streetcar line, and often bought cars of their own--resulting in fewer transit riders. Over time, even the ones who lived closer to Riverside purchased the cars that they saw their neighbors enjoying.

Streetcar companies, including PG&E, tried to fill in the gaps using buses, starting in 1929, to serve areas where streetcars did not yet run. However, streetcar business began a decline in that decade, and within ten years, the Land Park streetcar line was replaced by a bus route.
Posted by wburg at 12:47 PM No comments:

The above map, from about 1900, shows the Sacramento Electric, Gas & Railway Company system in Sacramento. Most of the streetcar lines stuck fairly close to the central city's grid, but there were several satellite lines that diverged from the main line.

The original line was the old Highland Park Railway line, which traveled through Highland Park (now part of Curtis Park) and Oak Park. This line was extended when the State Fairgrounds moved to Stockton and Broadway: the State Fair streetcar line can be seen in the lower right corner of the map.

The line on the upper right was an extension of the J Street line, extending into newly developing neighborhoods in East Sacramento. At this time, the area was not yet part of the city of Sacramento, but still in the unincorporated county. This area, originally farmland, was subdivided into tract homes by Wright & Kimbrough. The line started at the Southern Pacific station at Second and H and traveled all the way through the business district on J Street, through midtown, and out into the new suburbs. The line turned south on 46th Street and ran all the way through the East Lawn Cemetery.

A word on cemeteries: Cemeteries were an important streetcar destination. Even during the horsecar era, a car line ran to the Old City Cemetery at Tenth and Y Street, and the original J Street line was convenient for the old New Helvetia cemetery at 31st and J. The Highland Park line ran down Twenty-first Street past the Catholic cemetery behind Christian Brothers school on 21st south of Y. Some streetcar and interurban lines, like the Pacific Electric, actually had special "funeral cars" like the PE's Descano with open spaces for a coffin, but so far as I can tell no such equivalent existed in Sacramento. Streetcars could be chartered to carry groups of mourners to cemeteries.

Eventually, the J Street line was renamed the "E-L" line, and later the #3 line. It was extended south down 46th Street, south across the Southern Pacific mainline at 46th and R, and did a brief "dog leg" on T Street, coming to a terminus at 48th and V Streets. This extension served two purposes: it provided streetcar service to the back entrance to the State Fairgrounds, and it also served the new suburb of Elmhurst. There were plans to construct a streetcar line to connect the E-L line to the terminus of the T Street line at 28th and T. The line was registered with the state as the "Elmhurst Railway" and in 1910 a ground-breaking ceremony in Elmhurst was held, but for some reason (and believe me, I'd love to know why) the line was never constructed. The large parkway down the center of T Street, from about 39th Street to 48th, was probably originally intended as the right-of-way for the streetcar line that was never built.

Next time: The Land Park streetcar line.
Posted by wburg at 10:11 AM 5 comments: