When do condos work? When they're historic! 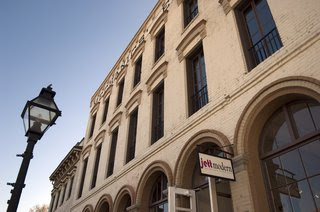 Speaking of D&S Development (same people planning on building on the Alhambra & T gas station lot, mentioned in my last post) their Old Sacramento historic-building rehab project is just about sold out, as reported in the Bee:

The Mechanics' Exchange building is a century-old structure with some very nice condo lofts inside. I got a chance to tour them while I was writing a story on Old Sacramento for Midtown Monthly a while back, and they really went all-out, not only to make the building comfortable but to restore its historic appearance and physical integrity. The windows were restored, not replaced, although they re-did the panes with dual-pane glass (for insulation and soundproofing) using the original 100 year old wooden frames, restored so they'll last another century.

How do you sell fairly expensive condos in a "down" housing market--ones that come without parking spaces? By putting them in an absolutely unique building in a great location. These units sold for the same reason why midtown properties are still selling as new-home sales are stagnant: people will pay extra to live in beautiful old buildings, especially if they're fixed up to modern standards, and especially if they're in urban settings where people want to live. I just hope that more vacant downtown buildings get the same treatment. My own first choice for a "next project" of that sort would be the Bel-Vue on 8th and L Street; the Berry across the street is due for a rehab, and the Bel-Vue is currently owned by SHRA. Considering its location and the beauty of its architecture, the Bel-Vue would sell as rapidly as the Mechanics' Exchange project, and probably at similar price points. It would also help preserve a currently vacant and at-risk structure.

It's nice to see a small, local developer do well. D&S are the real deal: their office is in this great Italianate mansion, and they already have a good track record of central city infill and historic rehab projects. In a weird market like this one, locals who can offer a unique product will do better than the big behemoths who assume that the only way to make money is to build the same crud in greater quantities.
Posted by wburg at 2:35 PM No comments: 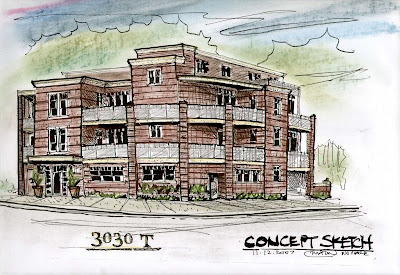 The aforementioned project at Alhambra and T has been revised. The original art deco look of the project, intended to reflect the appearance of the original gas station, has been replaced by a "Craftsman-ish" brick structure that is more oriented towards the corner. It's still four stories tall, 12 units with 13 parking spaces.

Here's a note from Mike Malinowski, the architect who designed the building:

"Attached are rough concept sketches of our current design direction for 3030 T Street. I hope this new tack addresses all the concerns that have been raised to date. This design has 12 units with 13 parking spaces, and is 3 story at the street frontages, with the fourth level reduced in footprint so it pulls back from the façade for significantly reduced massing. Materials and style are ‘neo craftsman’ which is in concert with both existing surrounding homes, and the newly approved development at Alhambra and S, as well as nearby structures in brick such as the cannery and the natural foods coop. The elevator was relocated to allow the rounded corner to be softened and opened up with a continuous balcony treatment, with brick columns and perforated metal railings (so that view of potential occupant balcony clutter is obscured). The unit design, site parking and circulation layout, and internal circulation have all been improved. Note that the elevations and fourth floor are not yet worked out in any detail - pending an approval of this direction, and the drawings are rough sketches consistent with the developers need to either find common ground to proceed in earnest, or stop.

Please also note that the attached rendering has been revised since the meeting late today with staff and it incorporates the suggestions for brick pilaster/column treatment, metal balcony railing vs glass, floor lines expressed at balconies, as well as a more ‘red brick’ coloration as is consistent with brick use in Alhambra projects noted above.

It is my hope that this new direction is a project that can be supported at all levels so that it can proceed. What is needed is a clear ‘yeah or nay’ – so that the developer can devote their resources to their other projects that have a clear path to success. After such considerable work and investment, it is easy to understand their position.

We will be meeting with Councilperson Fong on the 19th. at 11 am. Perhaps staff might circulate these electronic files to the neighborhood as appropriate prior to that.

While I liked the original design, I think this sketch was done as a way to make the building blend a bit better with the existing buildings, and personally, I would rather have seen something a bit bolder, that acknowledged the gas station. But I also kind of like this too. And the approval of development on this lot means that the gas station structure can be disassembled and restored, and given to the Towe for future use.

And often, when it comes to infill development, the winner becomes the project that leaves all parties equally dissatisfied.
Posted by wburg at 11:53 AM No comments:

I picked up a copy of American Bungalow Magazine at Newsbeat today, and was fairly inspired by an article by Jane Powell, entitled "Confessions of a Radical Preservationist." She proposed the creation of an organization called HALF: Historic Architecture Liberation Front, founded on the following principles:

1. All historic buildings are created equal, and endowed by their creators with the inalienable right to remain standing, be properly maintained and not be sacrificed on a whim, be that the whim of an individual, a government, an institution, or a corporation.

2. To paraphrase a Buddhist motto: No matter how innumerable historic buildings are, we vow to save them all.

3. Historic buildings should not be sacrificed in the name of "economic development," which is almost always code for "profit" or "power."

4. "Smart growth" that demolishes historic buildings and replaces them with inappropriately dense "infill" is not smart at all and will eventually be as discredited as the "urban renewal" of the 1960s.

5. There is no essential difference whatsoever between building more density in urban cores (at the expense of historic buildigns) and paving farmland. Both are driven solely by the pursuit of profit.

6. Historic buildings are not to blame for whatever social ills may be associated with them. The building did not choose to become a drug house or to have irresponsible owners.

8. There is no bigger scam than window replacement.

9. NIMBY really stands for Not Intimidated Much By Yelling.
Posted by wburg at 12:49 PM 5 comments:

Spotted on Alhambra and T 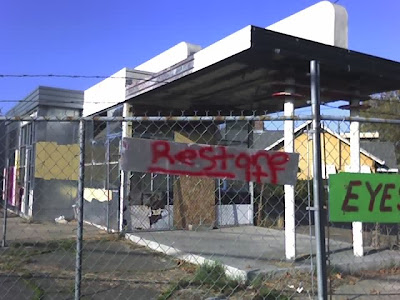 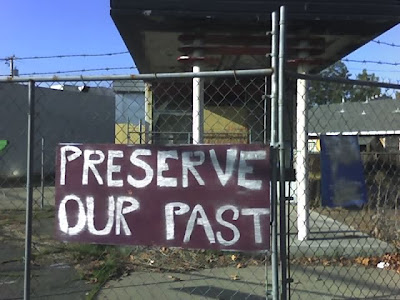 Just some evidence that preservation seems to be sinking in...for a long time someone had a hanging sign that said "EYESORE" on the fence in front of this long-abandoned gas station. More recently, someone else added two more signs with different interpretations of the structure.
Posted by wburg at 8:36 AM 6 comments: