More on the Bel-Vue/8th & K project 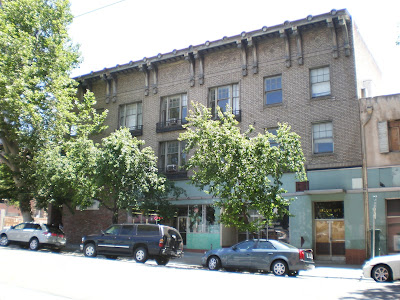 City plans to demolish the Bel-Vue and adjacent buildings were mentioned in my previous blog post, also posted as a Sacramento Press article on July 3 but at the time the developer and financing organization behind the project were not identified. Since then, both have appeared, along with an additional partner. The financier, Consus Asset Management, is a new player in Sacramento. The developer, Bob Leach, just completed another Sacramento project, the Le Rivage Hotel. The other player in this project is a well-known name in K Street real estate, Mohammed “Mo” Mohanna. All three are asking the city for $18.6 million in free real estate and several years of tax forgiveness once the project is complete, and they want this done immediately, before public input and analysis by city staff and commissions can be completed. 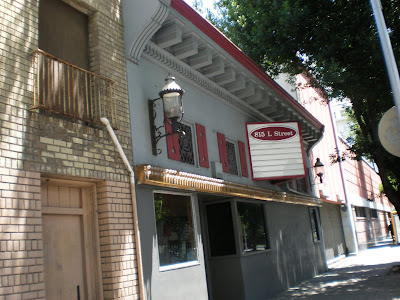 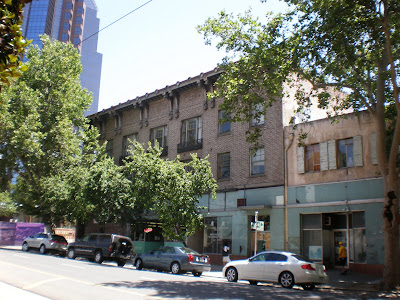 The city of Sacramento has announced its plans to demolish the Bel-Vue Apartments, a registered city landmark, in order to clear land on 8th Street for a potential future parking structure.


Located adjacent to the now-vacant corner of 8th and K Street, the Bel-Vue was built in 1910 as the American Cash Apartments. Built in the Craftsman style with Asian overtones, the three-story brick building contains apartments above a commercial ground floor. When the Bel-Vue was built, it was one of many downtown apartment buildings. If it was built today, the Bel-Vue would be described as a mixed-use, transit-oriented infill project. The building is currently owned by the city of Sacramento’s housing and redevelopment agency, the result of a complex land exchange between Mohammed “Mo” Mohanna, Z Gallerie owner Joe Zeiden, and the city of Sacramento. This land exchange was part of the currently stalled plans to rehabilitate the 700 block of K Street.


The city’s plan is to prepare an Environmental Impact Report (EIR) containing two possible alternatives for buildings to be built on the site, and then demolish the existing buildings. One alternative is a pair of residential towers 300 feet high, running from K Street to L Street along 8th, originally proposed by former owner Mohanna and developers John Saca (of the failed 301 Capitol Mall project) and John Lambeth. The other alternative is a 300 foot hotel tower at the corner of 8th and K, currently vacant, and a six-story parking structure on the site of the Bel-Vue and the other buildings at the corner of 8th and L. There is no developer or investor specified in the EIR notice of preparation; the city of Sacramento plans to create the EIR and demolish the Bel-Vue and nearby buildings on speculation, in case a developer appears who is interested in constructing the buildings the city has proposed for the site.


When the city of Sacramento acquired the Bel-Vue building and its neighbors, it was an occupied apartment building with several retail tenants on the ground floor. There were also commercial tenants in the adjacent buildings, and apartments above most of those buildings. The city of Sacramento evicted the residents, and today only one retail establishment, a Chinese restaurant, occupies the Bel-Vue, aside from a parking garage in one of the buildings facing L Street.


All of the buildings on the site have a role in local history. 815 L Street, constructed in 1915, was most recently the site of a nightclub of the same name. In 1957, the site was one of the original Sam’s Hof Brau locations. The side of the building, invisible from the street, still bears a painted mural advertising Sam’s. La Rosa, an Italian restaurant opened in 1927, occupied the site before the Hof Brau. On the corner of 8th and L is the Feldhusen Building, a two-story building with ground floor retail and residences upstairs. It was built in 1895 and remodeled in 1954. It was home to many businesses including grocery stores, dressmakers, and the Diamond Club Tavern card room.
Buildings like the Bel-Vue were once commonplace in Sacramento, but over the years they have become very rare.

Today, some developers seek out historic buildings for residential projects, converting them into modern apartments or condominiums. Local companies like D&S Development (http://www.dandsdev.com) have completed projects like the Old Sacramento iLofts and 1409 R, and are now restoring the historic Maydestone Apartments at 16th & J Street. Architect Mike Malinowski, contractor Bruce Booher and CFY Development helped convert the Globe Mills grain mill complex into unique residential lofts. At the Railyards, developer Thomas Enterprises will make the historic Southern Pacific shops buildings the focal point of a new downtown neighborhood. Other adaptive reuse projects like the Citizen Hotel, MARRS, the Cosmopolitan and the Firestone Building show how vacant historic buildings can be made into exciting, unique urban destinations. Projects like these are often more popular than newly-built projects because they offer one-of-a-kind places to live, work and play in an urban setting. They appeal to those who want to be close to the action of the central city and their downtown workplaces, or just like the unique character of historic buildings. Instead of demolishing the Bel-Vue, the building could easily be repaired and returned to its role as a place to live, with businesses on the street to serve downtown’s residents. Restoration of historic buildings is also a greener option than new construction, as it needs far fewer building materials and requires far less landfill space (where the demolished building’s components would end up.) If sales of recent projects like the 1409 R lofts (opened in April and already two-thirds sold) are any indication, these projects are popular even in slow economic markets, while urban infill projects in new buildings are far less successful. Historic buildings can also qualify for tax credits and other incentives that can make rehabilitation cheaper than demolition and new construction. In the right hands, the Bel-Vue could be a gorgeous, attainable new home for Sacramento’s residents for another hundred years.


In recent years, the city of Sacramento has seen many proposed projects fail to materialize. The failure of projects like John Saca’s 301 Capitol Mall towers at 3rd and Capitol resulted in ugly, gaping pits in our city’s urban fabric. Projects like the 700/800 block, bogged down by unexpected resistance and a poor economy, sit languishing, waiting for a better plan to appear. Projects that encourage the demolition of landmarks encourage speculators to allow their historic downtown properties to sit vacant, deteriorating for years or even decades, with the hope of an eventual skyscraper-shaped payoff that may never arrive. More forward-thinking developers could turn the same buildings into Sacramento's urban showpieces.


No developer or investor has been named by the city to actually build this project or pay for it, and even if a developer and/or investor does arrive, if they want to make significant changes to the plan they would need to complete a new environmental document, making this effort worthless. The sacrifice of one of Sacramento’s irreplaceable historic buildings would be for nothing. And even if the city’s long shot is successful, and a developer does build the project, we will lose a historic landmark and a quarter-block of potentially useful buildings for a six-story parking garage in a neighborhood with many underutilized parking garages.


To give public comment about this issue, contact Jennifer Hageman of the City of Sacramento’s Community Development Department at jhageman@cityofsacramento.org or (916)808-5538. Written comments should be sent to Jennifer Hageman, City of Sacramento Community Development Department, 300 Richards Boulevard, Sacramento, CA 95811. Comments are due before 4:00 PM on July 27, 2009.
Posted by wburg at 2:29 PM 4 comments: