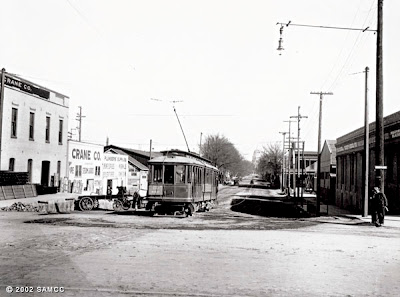 In the late nineteenth and early twentieth century, electric railroad technology produced a new form of transportation, known as the electric interurban railroad. These systems provided a middle ground between the big, continent-spanning Class 1 railroads and local, city-serving streetcar lines. One of the advantages of electric railroading over steam railroads is lower cost of operation, especially for shorter trains. Steam locomotives pulling only one or two passenger cars are less cost-effective than the same locomotive pulling a long string of cars, but local service often does not require that much capacity. An electric interurban car is more flexible: like modern light rail, a single car can work during off-peak periods, but in situtations of higher demand trains can be made of multiple cars, controlled by a single motorman.

Electric railroads also carried freight. While electric freight motors were not as powerful as steam locomotives, they were fast, and did not need to stop to take on water or coal. This made electrics ideal for perishable and express cargo, less-than-carload freight, and short-haul deliveries.

Electric interurbans sprung up around the country. California was home to some of the largest and best-known interurbans, including the Pacific Electric in Los Angeles and the Key System in the Bay Area. Sacramento's first electric interurban was the Northern Electric, founded in Chico. Their system extended through Marysville/Yuba City, with branches to Colusa and Oroville, and reached Sacramento in 1907.

Another advantage of electric interurbans over steam railroads was the relatively small and non-noxious equipment they used: while steam trains used noisy, smoky locomotives and cars were large and bulky, interurbans were very quiet and the cars were smaller than steam railroad cars. This meant that interurban trains could literally run through the middle of downtown, very convenient for passengers.

In Sacramento, Northern Electric's mainline entered the city at 18th and C Street, next to the Blue Diamond almond grower's co-op, turned down D Street, and zig-zagged to Fifteenth and I Street. The train turned left on Eighth and I to Northern Electric's original station on 8th and J Street. The main line continued down 8th Street to M Street, and across the river on the M Street Bridge, predecessor of the Tower Bridge.

Next time: the Northern Electric's streetcars in Sacramento.
Posted by wburg at 10:40 AM 2 comments: