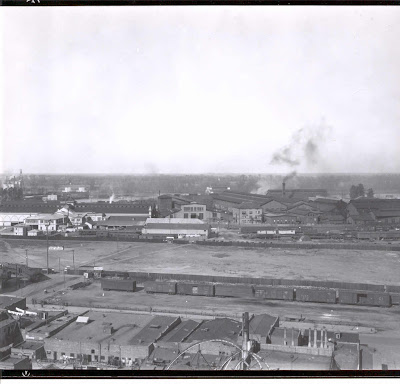 The latest news on the Railyards in the Sacramento Bee is that Thomas Enterprises has agreed to trade two of the seven Shops buildings to the state of California for use as the Railroad Technology Museum:

There is also an editorial on the costs of the project:

The Bee characterizes the land transfer as a "donation," but it is actually a trade. In return for the land for the RTM, Thomas Enterprises receives two parcels of land. One is at the northern edge of the railyards, in the area where the American River once ran, intended for the Bass Pro Shop and a park. The other is along the waterfront, where Thomas Enterprises wants to build a pair of hotel towers.

There are strings attached: the Boiler Shop will be transferred immediately, and thus restoration and repair of that building can start very quickly, but the Erecting Shop won't come into possession for three years, by which time the museum has to show they have money for restoration and 25% of the funds for exhibits. Considering that the RTM is currently 85% funded, and they have many of their intended exhibits sitting out behind the Boiler Shop, that shouldn't be much of a problem at all.

This Tuesday will be the final City Council meeting about this issue, and the Council will vote on whether to adopt the Railyards EIR, and approve other various measures that boil down to a big "go" flag for the Railyards project.

There are other issues, of course. The National Register of Historic Places Historic District has not yet been established. National Register designation will be an important factor in soliciting grants, loans, tax credits and other funds for historic preservation and restoration of all of the Shops buildings. Issues like access, infrastructure and the remaining million other details still have to be worked out, and then of course there's the big question of whether the state is willing to cough up the hundreds of millions of dollars that Thomas Enterprises wants to bankroll infrastructure.

Instead of another giant rant, here's an announcement about a couple of local history and preservation events:

And this Sunday, December 9:

DO YOU KNOW THE TOWN OF SAMA?

The Southside Park Neighborhood Association is inviting everyone to their
monthly meeting to learn more about who was here before the gold seekers, the downtown merchants and what we see every day.

UC Davis Professor Sheri Tatsch, PhD, will tell about Sama, a Nisenan town of perhaps 1200 to 1500 inhabitants that was on the site of the current Old City Cemetery.

Zazz in the Railyards

I noticed this article in today's Sacramento Bee, and it got me thinking about what sort of things are planned for the Railroad Technology Museum that would fit the requirements put forth in the article and some of the comments after the article.

The gist of the article is, how do you draw people with a railroad museum? In my mind, you do it by making the story modern as well as historical, by varying exhibits, and by giving people things to do.

The RTM plan, despite at least one Bee commenter's comment and the rather sketchy outline described by the Bee, is very much a developed plan. The original Railroad Technology Museum was supposed to be built in the mid-1980s before state budget crises delayed its construction at Front and R Street. The current RTM plan was started in 1999, when the plans to move it from Front and R Street to the Shops buildings was first put forth, and backed by the recommendation of the Sacramento City Council. There is not only a full, feasible proposal, it is also fully funded and ready to begin as soon as title to the buildings can be obtained (unlike Thomas Enterprises, who are depending on the city and the state for the vast majority of their funding.)

The two-building plan is based on a fairly simple concept: the Boiler Shop (the tin building nearest the freeway) would retain its current use as a restoration shop, while the Erecting Shop (the building next to the Boiler Shop) becomes the display area, with the transfer table in the middle to move equipment easily.

The boiler shop is a gigantic, working garage where railroad cars, locomotives, and other railroad equipment would be transformed from rusting hulks into museum pieces. This not only serves the purposes of historic preservation, it also continues the tradtion of the Shops as a site for locomotive repair, and provides educational opportunities for vocational training in fields from mechanical engineering to welding to woodworking to painting. By making the restoration operations part of a visitable museum, the public can come in and see the work in process. Instead of seeing static museum pieces or seemingly abandoned hulks, the public can see machines being worked on and specialists at work.

The erecting shop is far better suited for the formal museum than the boiler shop: made of brick, it can more easily be heated and cooled, and is aesthetically a lot prettier building. Displays planned for the erecting shop include cutaways of locomotives, a locomotive boiler (weighing tens of thousands of pounds) suspended in mid-air on one of the shop's heavy cranes, a high-speed rail locomotive (to point at where the future of railroading is going, assuming our government gets its act together) and other modern equipment (maybe things like the Green Goat, a hybrid diesel-electric locomotive that is more fuel-efficient than some large pickup trucks.) Interactive displays include locomotive cab simulators, where visitors can do more than just look at stuff: they can try out things firsthand.

The transfer table, in between the shops, has a very important role. It is used to move equipment between the bays of the shops. Having the transfer table means that the Railroad Technology Museum can do something that the existing CSRM can't do: it means that exhibits can very easily be swapped in and out, to add variety and interest. In the main Railroad Museum, most of the locomotives are fixed in place. Engines like the Gov. Stanford, CP Huntington, Sonoma and Empire were put inside the building before the floors were built, and the track taken up behind them. The million-pound Cab-Forward locomotive certainly can't be moved. The Roundhouse area has some movable exhibits, and several of the center stalls are occupied largely by equipment that can be changed out easily, but cars like the dining car and mail car can only be moved with great difficulty and extensive preparation, and the Pullman sleeper car, with its piston assembly (that simulates car motion), can't be moved at all.

But the RTM, with the transfer table, won't have that problem. A fully functioning restoration shop means that equipment rehab and exhibit preparation can be done constantly. The transfer table and track within the Erecting Shop means that moving and re-locating exhibits is as easy as pulling them out of one stall and moving them into another. More variety equals more interest.

Modern railroad companies have a vested interest in promoting railroad museums: with railroad freight traffic at an all-time high, and many cities turning to rail to relieve freeway congestion, railroads need employees. And most of those employees (and I know many) started out as kids that fell in love with trains and just never fell out when they grew up. I know not many people believe it, but railroads are in our future. Those who claim it is "19th century technology" somehow fail to understand that cars are 19th century technology too, and the way things are going, cars may not be as ubiquitous as they were in the last century. Many folks who commented remarked that we have a long way to go to catch up with railroading in the rest of the world: a railroad technology museum, which teaches how railroads affect our lives and where the technology is going (as well as where others have led) can help prompt us to catch up! At least one manufacturer of high-speed railroad locomotives has already pledged their support to provide a HSR locomotive for the RTM.

Feasibly, thanks to the planned rail reorientation, there will be a direct rail connection between the Sacramento Southern (CSRM's tourist railroad) and the Shops, and there's no reason why either a rail shuttle or actual trains couldn't be used to go between them. How cool would it be to take (for example) a gas motor car or other lightweight rail equipment from the Shops to Old Sac?

Oh yeah, about the "one building" idea: Because the Boiler Shop is made of tin, it is not feasible to add air conditioning or heating. Effectively, you'd have to strip off the tin, build an internal structure inside the building, then put the tin back on. In the process, you'd lose a lot of the building's chunky, industrial aesthetic appeal (a look that could be restored, despite how run-down the building is now) and dramatic views of the internal building frame. Worse, they would lose the Boiler Shop as a restoration shop space. Restoration operations would have to be set up at State Parks' property on Front and R Street.

One thing I think people forget is that trains are BIG. The Shops buildings are massive buildings because they were intended to construct entire locomotives. A railroad museum is not intended to hold little things, or pictures. Railroad museums hold BIG things, like the last Cab-Forward locomotive left on the planet, or the massive Santa Fe 5000-series freight locomotives. Equipment for whom the term "it weighs a million pounds" is not an exaggeration, but, in some cases, an understatement. The RTM needs two buildings because this equipment just doesn't fit in a small space--and because the two buildings will fill very different roles.

Sacramento has the potential here to become the home of the finest railroad museum in the world. We are already home to one of the finest railroad museums in the country. Adding the RTM would make us the home of a museum in the class of the Field Museum or the Museum of Science and Industry in Chicago, or the Smithsonian Air & Space Museum in Washington DC. Why a railroad museum, some might ask? Because Sacramento is an enormously important place in the history of railroading--and thus the history of California, the history of the United States, and, yes, world history. And we're still an important economic place for railroads--and thus the economy of California, the economy of the United States, and, yes, the world economy.
Posted by wburg at 3:34 PM 1 comment: