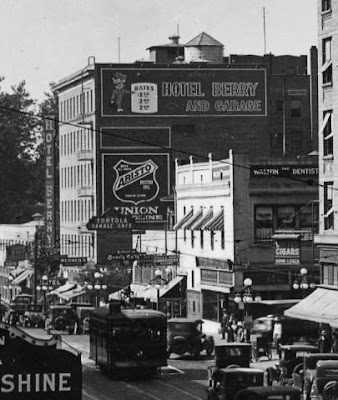 Here is a link to yet another Sacramento Press article, this time on the Berry Hotel. My experience with this building comes from both the historian and social work perspective; for three years I worked with the residents of Sacramento's SRO hotels. This makes the issues surrounding the Berry more personal. Historic preservation is not just about buildings. It is about people. Without people, a building really is just a pile of stuff. The context of human interaction with that pile of stuff is what makes a building historic, or valuable, or just a place to live.

The story:
http://sacramentopress.com/headline/3831/City_to_close_historic_Berry_Hotel
Posted by wburg at 8:59 AM No comments:

My interview on Insight was apparently scheduled for Monday morning, not Tuesday morning as previously mentioned, a detail that both myself and the show's guest host were unaware of until Monday morning. The show went pretty well, and the podcast can be heard here.

Also, the City Council will not be removing the item regarding consolidation of the Planning and Design Commission from the consent calendar; apparently the item is a general update of tasks for the Law & Legislation Committee, and not something that will be acted upon today. But it will come up again; last night's NAG meeting included discussion of the item, and consisted largely of development director Bill Thomas explaining why combining the two boards was a good idea and everyone else in the room telling him it was a bad idea. More can be found in the article on last night's NAG meeting at Sacramento Press.

update: Apparently it is being removed from the consent calendar and being brought up in the March 17 general meeting.
Posted by wburg at 11:31 AM No comments:

I posted another article at Sacramento Press about this. At the last Planning Commission meeting, Brian Holloway of the Development Oversight Commission said that any action was months down the road and they had not formulated specific recommendations. Two weeks later the City Council is voting to create an ordinance to eliminate the Design Commission based on recommendations the DOC claims they haven't made yet.

Also, this coming Tuesday Feb. 24, I will be interviewed on Insight on KXJZ, in order to talk about the Archy Lee story--the one I wrote the article about for Midtown Monthly this month: http://midtownmonthly.net/feb09/lee.html

That's the same day as the City Council meeting referenced in the article above. Should be an interesting day.
Posted by wburg at 10:45 AM No comments:

The February issue of Midtown Monthly features an article I wrote on a bit of little-known local African American history: the Archy Lee slave trial. It's posted on the MM website here:

I looked high and low for a picture of Hackett House, or the building where the State Supreme Court met in 1858, but had no success. Tim, editor extraordinaire, used a commonly-used engraving used in runaway slave advertisements as the illustration for the piece. The engraving method used to print this sort of image is commonly known as a stereotype.
Posted by wburg at 4:31 PM 1 comment:

This article was forwarded to me by Panama Bartholomy, a neighborhood activist. If you have a chance, come to City Hall tonight (915 I Street, New City Hall council chambers, 5:30 PM) and tell the Planning Commission that you don't want the city to shut its citizens out of the planning and design process.

On Thursday the Sacramento Planning Commission will have a public hearing on a proposal (http://www.cityofsacramento.org/dsd/meetings/commissions/planning/2008/documents/DOC_letter.PDF) by the Development Oversight Commission (DOC), a City-appointed group comprised almost entirely of real estate developers, architects, and business consultants, to eliminate the City's Design Review Commission and change the development approval process in the City so that City staff will make most planning and design decisions administratively, leaving no opportunity for public input.


The reasons you and members of your association should come to the hearing at City Hall on Thursday February 12th at 5:30pm to testify against this proposal:


1. This attempt to reduce citizen and citizen-commission input and oversight of development in our community has undergone no public vetting from community groups that will be affected by such a fundamental shift in our City's development.


The proposal was developed and sent directly to the Mayor with no input from the Planning or Design Review Commissions. More importantly, the proposed ordinance was not brought to any neighborhood association or other community-based organization that normally comments on development in their communities.


This is not the kind of transparency and open government practices that should be an essential part of such a fundamental change in our community's development approval process.


2. The proposal will greatly reduce opportunities for Community input


The proposal will eliminate the City's Design Review Commission and fold its responsibilities into the Planning Commission and shift “…the majority of decisions to the staff level..”. The movement of “…the majority of decisions to staff level…” will likely reduce community involvement from the development review process. Communities have a right to be able to comment on projects that will be built in their neighborhood.


Even after moving most decisions to the staff level, by eliminating the Design Review Commission the public loses one of the two opportunities they have left to comment on development projects proposed in their neighborhood. The recommendation would squeeze all public input on a project into one meeting where every issue with design or planning will have to be settled. This will almost certainly create the types of extremely long meetings that discourage public involvement and will force complex decisions that have long-term impacts on communities into unreasonably short decision-making time frames.


Reducing opportunities for citizens to be involved in projects in their neighborhoods decreases transparency, will cause more projects to be appealed to the City Council and will increase the likelihood of lawsuits to block projects. This will decrease the effectiveness of the development review process.


Please come to the Planning Commission hearing and comment on this item and let the City know that you think the public should have a role in development decisions in our City. Please distribute this email to other residents who would come to testify in support of preserving the role of the citizen in our city's development.


The recommendation can be found here: (http://www.cityofsacramento.org/dsd/meetings/commissions/planning/2008/documents/DOC_letter.PDF) and the meeting is at the New City Hall, 915 I Street, 1st Floor- Council Chambers, February 12, 2009 at 5:30 P.M.
Posted by wburg at 9:58 AM No comments: 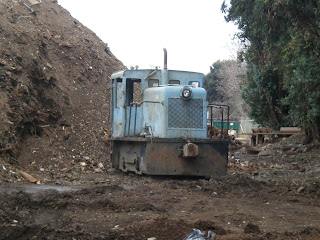 I was out by North B Street yesterday and snapped some photos of one of my favorite things, the little 25-ton General Electric locomotive in the "Simsmetal" junkyard lot. It appears that they have taken up the tracks around it (it may still be sitting on a last bit of track, or just in the dirt) and it's just sitting there. I went up the old spur to the mainline and got some shots of the other side, and noticed a big dent in the cab, maybe why they stopped using it. 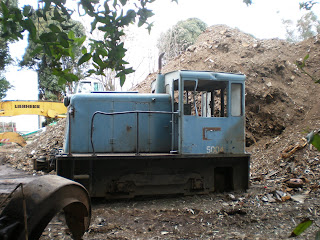 I'm very fond of small locomotives, and this one is pretty much my favorite--so much so that I built a model of it, and occasionally run it on my layout: 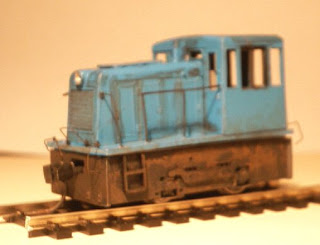 I kind of want to figure out a way to save it. The California State Railroad Museum has been carrying out an active program of de-accessioning (fancy word for "getting rid of stuff") equipment not vital to their mission, partially to reduce their curatorial overhead and partially because they have to pull everything they own out of the Shops area to make way for environmental cleanup and the Railyards project stuff. Most small museums don't have much cash for accession outside of private donations, hard to get these days.

If they're willing to sell it for scrap value, the locomotive would probably cost about $7500, plus the cost of transporting it to wherever it would go, probably at least $5000.

Hm. I wonder if it would fit in my backyard. It would make one hell of a conversation piece, anyhow.
Posted by wburg at 10:06 AM 2 comments:

Agenda items for this month include the status of a couple of Historic Resources Surveys that are going on right now, including an inventory of Sacramento's hollow sidewalks and raised streets.
Posted by wburg at 10:40 AM No comments: 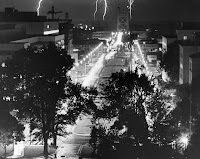 While snooping about online for traces of Sacramento history, I found an edited version of a presentation I gave last year on the history of M Street, also known as Capitol Mall. The local Urban Land Institute group apparently used it as part of a discussion about a national design competition for Capitol Mall.

Here's a link to the presentation:
8.CapitolMallNov.06.08.pdf
I suppose they edited it for time, but they removed some of my favorite images from the presentation, including the urban characteristics of the M Street waterfront neighborhood before the redevelopment era. I have posted a nice dramatic one from about 1960, facing the river, showing some bits of the old neighborhood being rapidly overshadowed by the expanding Capitol Mall project.

I've still got the original presentation and notes. At some point I'll have to give a talk on Sacramento's lost neighborhood and show the whole story with all the slides.
Posted by wburg at 11:26 AM No comments: