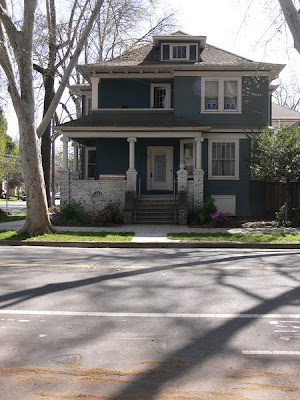 On Sunday, September 20, the Sacramento Old City Association will hold its 34th annual historic home tour in the Boulevard Park neighborhood. Tour hours are from 10:00 AM until 4:00 PM.

The SOCA Home Tour is an annual event, and the main fundraiser for the Sacramento Old City Association. This home tour includes an inside look at eight restored historic homes in Boulevard Park. Tour visitors can walk through each of the homes on the tour to see how the workmanship of historic homes is often as beautiful on the inside as the outside.

The Home Tour also includes a street fair, including artisans and craftspersons specializing in historic home repair and restoration, local artists, crafters, photographers and artisans, and community organizations. Live music will be provided by Julie the Bruce, Andrew Surber and "Drum Polygon." The Sacramento "Capitol A's" Model A Club will display their restored antique cars throughout the tour. CLUCK (Campaign to Legalize Urban Chicken Keeping) will raffle a chicken coop and other prizes at their booth.

Tickets for the Home Tour cost $20, but you get a $1 discount if you arrive on a bicycle. Tickets for the fair can be bought at the site of the tour: the SOCA tour booth will be located on the corner of 21st and G Street, directly in the street median. Visiting the homes requires a ticket, but the street fair is free, and will run along 21st Street between F and H Street.

This year's tour is located in the Boulevard Park historic district, a neighborhood that is visually distinct due to the landscaped street medians running down 21st and 22nd Street. These medians were part of a real estate development project dating to 1905. Located on the site of the old Union Park racetrack, Boulevard Park was the first planned development of the Wright & Kimbrough real estate firm. The development's boundaries were from B Street to H Street between 20th and 22nd, with a portion of 23rd.

When the neighborhood was built, a streetcar line ran along H Street from downtown to McKinley Park. Many of the most elegant Boulevard Park homes were located facing H Street, with more modest but still beautiful homes closer to C Street. C Street had its own streetcar line, but freight trains also ran on the same tracks until 1953! In addition to the landscaped medians, three blocks in Boulevard Park have small central park areas located in the center of the block, in a space normally occupied by backyards and alleys. Covenants on property deeds required minimum setbacks, prohibited high fences and noxious uses, and made provision for shared tenancy of the alley parks. These features gave the neighborhood a pleasing, park-like look that is still apparent a century after its construction. The current Boulevard Park neighborhood includes an area beyond the original development. Homes in the neighborhood are a mixture of Craftsman and Prairie, Classical Revival, Colonial Revival, Spanish Revival and other revival st yles. Elsewhere in the neighborhood are Victorian homes of the Queen Anne, Stick, Shingle and Italianate styles.

Boulevard Park is one of Sacramento's most beautiful and well-known neighborhoods, and this year's SOCA Home Tour provides a unique look at the architecture, culture and creativity that make our city a great place.


SOCA's Web site can be found at: www.sacoldcity.org and includes membership information, details of SOCA activities and events, and updates about planning and preservation issues in Sacramento's central city.

Photograph taken by Randy Lum.
Posted by wburg at 10:15 PM