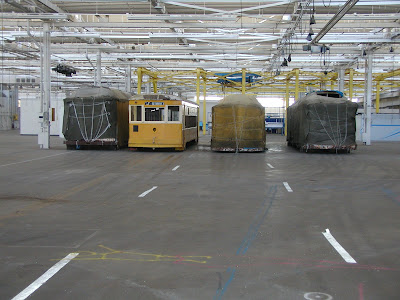 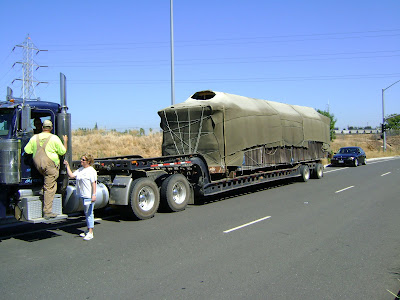 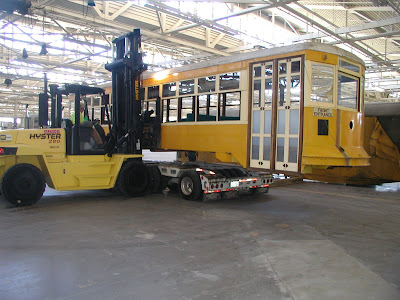 I got word a month or two ago that a group of Sacramento streetcars owned by Dain Domich, president of "Friends of Light Rail & Transit," were being moved to a new location. I eagerly fired off an email asking for permission to photograph the streetcars in transit, but then was unable to attend due to that whole "having to work at a job" thing. Fortunately, I was more recently steered towards the FLRT Web site, which included the above photos of the streetcars in transit and at their new home.

The plans for what to do with the cars are kind of vague, and I have heard various stories. Personally I'm still hoping that a way can be found to restore them, either for regular use or occasional special-occasion use. Of the four pictured here the most practical first choice is the big yellow "Christmas car," a metal-bodied car that is probably the easiest to restore (it is metal rather than wood, has more safety features, etc) to operating condition. The second choice might be the old "Elverta Scoot," a car that started out as a Los Angeles style streetcar but was rebuilt into an enclosed car, intended for multiple-unit runs to Rio Linda and Elverta, mostly used as a school train. That has a reinforced metal frame and composite exterior, although its wooden components have probably faced some deterioration.

Obviously, to run them we need a streetcar system. Streetcars can be run on our current light rail system with no physical modifications at all (RT occasionally runs their one restored streetcar, PG&E 35, on Light Rail tracks) although a regular streetcar would require some signal and schedule adjustments. The other plan, to build a Sacramento/West Sac streetcar line, using the K Street portion of the RT line, is kind of in limbo right now. In my own perfect world, a line running a combination of modern streetcars (low-floor for universal access, with air conditioning etc.) and historic streetcars (using the SF Market Street Railway as a model) would be ideal, providing universal access on the modern cars and tourist appeal (plus practical utility) on the historic cars.

At the City Council meeting on Tuesday, members were appointed for a streetcar commission that will explore routes, funding mechanisms and concepts for a new Sacramento streetcar line. Once meetings start I plan on attending, and passing along a few suggestions--including inspiration from our local past, and other cities' examples.

More information, including some interesting draft documents, can be found here:

Friends of Light Rail Historic Streetcar page
Posted by wburg at 11:19 AM

will you drop me an e-mail? i have a project that i'd like your help on.

Is this blog dead?

This blog is history, what happen wburg?

I have several of your books, including the one on Streetcars of Sacramento. I would like to ask you some information regarding routes and times in 1919 for a middle grade novel I'm writing set in Sacramento, 1919.

I would appreciate it very much if you would contact me. Thanks so much.

I don't know the exact date of this commentary but I road those street cars from Grandma's house in Oak Park to downtown many times and loved it. What a great transportation system. Too bad it was all dug up and can not be redone at this time. It was a shame in all the cities that had steet cars to have torn it all up. Progress isn't always the right thing to do.
Patti Turner hpt9@frontiernet.net

Sorry I haven't updated this blog in, well, three years now...too busy writing articles and books! It will stay in a holding pattern for now.