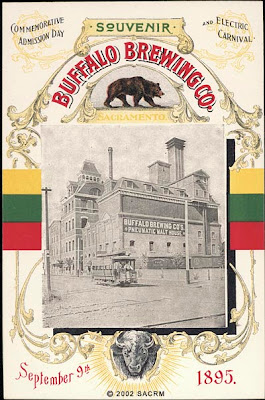 Albert Gallatin and his projects left a strong mark in Sacramento's streetcar history. His home at 1526 H Street was built along the old City Street Railway horsecar line in the heyday of Mansion Flat. As the manager of Huntington-Hopkins Hardware, main hardware supplier to the Pacific railway and the growing railroad empire of Central Pacific, Gallatin spent lavishly on the building that would later serve as the California governor's mansion. In 1887, he sold his home to Lincoln Steffens and relocated to San Francisco when Huntington & Hopkins moved their headquarters from Sacramento to San Francisco.

However, Gallatin's days in Sacramento were not over. In 1892, he and his partner H.P. Livermore applied for a franchise to operate a street railway in Sacramento. This system would be powered by a new hydroelectric plant, then under construction in Folsom. The new company was called the Sacramento Electric Power and Light Company, and it purchased and consolidated the Central Street Railway into its new system.

In 1895, an Electric Carnival celebrated the completion of the first long-range power transmission lines in California, from Folsom to Sacramento. The carnival showcased the various uses of electricity, including electric light and electric streetcars. The new hydroelectric system was far cheaper than coal-fired steam boilers to generate electrical power, and a streetcar system provided an excellent and steady customer. Owning both the electrical utility and the streetcar system provided a winning combination. Gallatin's new company was able to deliver cheap electric power to Sacramento homes, and transport Sacramentans on his electric cars. Electricity also played a role in the Oak Park suburb, as a new electric amusement park, Joyland, was built to draw riders, showcase electric power, and bring more suburban growth to Oak Park. By 1895, Gallatin's company was consolidated again and renamed the Sacramento Electric, Gas & Railway Company. In that year, there were seven operating lines in Sacramento: two to East Park, four at Oak Park, and one at the city cemetery. In 1906, SEG&R was made part of Pacific Gas & Electric.

Other California capitalists learned this lesson, and expressed it in even more successful ways in the first decade of the twentieth century.

Henry Huntington, nephew of Central Pacific/Southern Pacific's president Collis P. Huntington, learned the business building streetcar lines for Southern Pacific in San Francisco, and applied what he had learned in Los Angeles. He consolidated the multitude of streetcar and small interurban lines in Los Angeles and Orange County into the Los Angeles Railway and the Pacific Electric, the largest interurban network in the United States. Huntington also perfected a "triangle trade" of development which produced great results: In addition to operating the streetcar system, Huntington also owned a real estate company, and he also owned a power company. Thus, Huntington streetcars were powered by Huntington electricity, and ran to Huntington suburbs.

It was common practice for Huntington's streetcar or interurban lines to build out to open fields, where there were not yet customers, and advertise lots for sale. Potential purchasers of suburban homes, who might otherwise be unwilling to move out to the suburbs far from their jobs, liked the idea of easy streetcar transit from home to work. Because the neighborhoods were mostly vacant land, the streetcar lines operated at a loss.

Francis "Borax" Smith followed much the same model in the Bay Area with his Key System interurban trains and in-city streetcars. Smith's system sold real estate throughout the East Bay, and built attractions like the Claremont Hotel and Idora Park (an electric amusement park, similar to Joyland) to attract ridership. Key System had its own powerhouse as well, constructed in Emeryville. From its completion in 1939 until 1958, Key System interurban trains carried passengers over the lower level of the Bay Bridge to San Francisco.

In Sacramento, population growth was slower than that seen in the Bay Area and Los Angeles, but many businessmen saw the potential for suburban growth surrounding the central city, all operating on streetcar lines. Next time: The suburbs leapfrog Sacramento's city limits--with PG&E streetcars leading the way.
Posted by wburg at 1:17 PM