Since I really haven't used this weblog too much so far, I figured I would give myself a project that would need regular updating. Thus, I present the first of a series of weblog posts discussing the development of streetcar suburbs in Sacramento. This isn't intended to be an exhaustive history, just a brief overview with some discussion of how streetcar suburbs work. 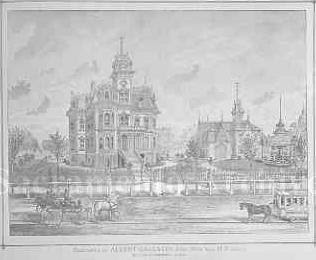 Gallatin Mansion, with horsecar running in front of it

Despite the contemporary image of public transportation as primarily a means for the working class and poor to get around, streetcars (along with other early public transit methods like steamboats, steam railroads and omnibuses) were originally intended for the middle class. While the wealthy were able to afford carriages, horses and stables, middle-class households typically did not, especially in cities. While a nickel for a ride seems ridiculously cheap now, that added up to fifty cents a week. For a 19th century laborer, that 50 cents represented food for their family that they might not otherwise be able to afford, and typically the denser, less expensive housing of working people was located closer to downtown.

Omnibuses, the horse-drawn predecessor to the city bus, were common in Sacramento in the 1860s. They did have limitations, though, as they could not carry very many people and they were generally slow in Sacramento's unpaved streets. The coming of horse-drawn streetcars represented an improvement in speed and capacity, as rail-supported cars had less friction to overcome and wouldn't sink into a muddy street.

Sacramento's first suburban streetcar line was the City Street Railway, inaugurated on August 20, 1870. It ran from the Central Pacific depot on Front Street, down K Street, to the California state fairgrounds at 20th and H Streets. R.S. Carey was also a president of the State Agricultural Society, which organized the State Fair. This meant that his streetcar line served several purposes: in addition to providing public transporation for commuters, the line was an easy way for visitors to get from the train station to the state fair. This connection appears again and again in the history of streetcars: typically the owner of a streetcar line also owned something else which made the line money. In addition to the line to the fairgrounds, there was also a line to the State Fair Pavilion, which was located on what is now the grounds of Capitol Park.

The homes along the City Street Railway were the homes of the middle class or the wealthy, in the neighborhoods now known as Alkali Flat, Mansion Flat, and New Era Park. Once the state fairgrounds were moved to the corner of Stockton and Broadway, the old fairgrounds area became Boulevard Park. While the area has changed much, the streetcar line ran directly in front of homes like the Gallatin Mansion, better known as the former Governor's Mansion. While Gallatin had a carriage-house and stables, many of his slightly less wealthy neighbors took the convenient streetcar.

Within a year, Carey's streetcar line had run all the way to the eastern edge of town, Thirty-first Street, and a privately-owned park known as East Park (known today as McKinley Park.) This provided another neighborhood amenity that was convenient to visit via horsecar, including a pond, gardens, a small zoo, and a bandstand and dance area.

Next time: The Central Street Railway's lines to Highland Park and Oak Park, and the coming of the electric trolley. 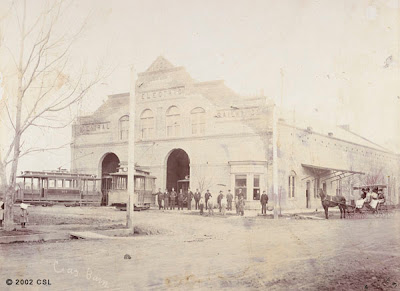